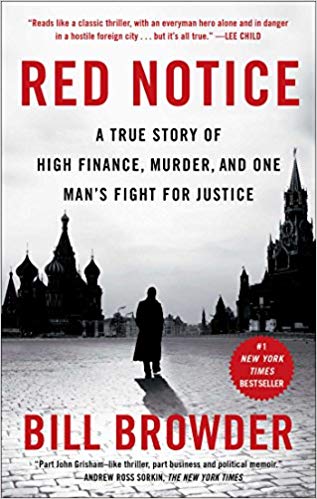 Reading and reviewing books is a key part of being an author – crucial for improving our craft, and perhaps positive Karma?

In 2019, I read and reviewed 62 books for my Goodreads Challenge. My reviews were also posted on Amazon and Bookbub.

Red Notice was my favourite read from last year. It is an inspirational memoir, but it reads rather like a John Le Carré spy thriller!

It also showcases the power we all have within us to promote positive change.

“[Red Notice] does for investing in Russia and the former Soviet Union what Liar’s Poker did for our understanding of Salomon Brothers, Wall Street, and the mortgage-backed securities business in the 1980s. Browder’s business saga meshes well with the story of corruption and murder in Vladimir Putin’s Russia, making Red Notice an early candidate for any list of the year’s best books” (Fortune).

This is a story about an accidental activist. Bill Browder started out his adult life as the Wall Street maverick whose instincts led him to Russia just after the breakup of the Soviet Union, where he made his fortune.

Along the way he exposed corruption, and when he did, he barely escaped with his life. His Russian lawyer Sergei Magnitsky wasn’t so lucky: he ended up in jail, where he was tortured to death. That changed Browder forever. He saw the murderous heart of the Putin regime and has spent the last half decade on a campaign to expose it. Because of that, he became Putin’s number one enemy, especially after Browder succeeded in having a law passed in the United States—The Magnitsky Act—that punishes a list of Russians implicated in the lawyer’s murder. Putin famously retaliated with a law that bans Americans from adopting Russian orphans.

A financial caper, a crime thriller, and a political crusade, Red Notice is the story of one man taking on overpowering odds to change the world, and also the story of how, without intending to, he found meaning in his life.

Bill Browder recounts his own journey as a rebellious young man from an academic family, to the creation of a hugely successful investment fund, built through scrupulous research of undervalued Russian public companies. Unfortunately, he and his team made many very powerful enemies in the process, which eventually led to the arrest, imprisonment, torture and death of young lawyer Sergei Magnitsky.
The author relentlessly campaigned for his friend Sergei, who was a modest but tireless investigator of the truth.
The Magnitsky Act was signed into law in December 2012 by President Barack Obama. Since then it has been enacted in many other countries against human rights offenders, by freezing their assets and curtailing travel opportunities.
If you are interested in human rights issues Red Notice is a must read.