Downhill on a Bike in Bali

Shaking out the Rice

The highlight of my first trip to the Indonesian island of Bali was way out of my comfort zone.

Indeed, I questioned my sanity at setting out on a Downhill Eco Bike Tour, on the singular recommendation of a seventy year old tourist, for I had not been astride a bicycle for more than fifteen years!

The great day arrived, and I was collected from my homestay accommodation in the village of Nyuh Kuning, and joined a small group of others on a trip north to Kintamani, a town overlooking Mount Batur, an active volcano rising to 1717m.

The vast lava fields from the eruption of 1968 could be viewed from our first stop – a local restaurant. Mount Batur last erupted in 2000, and I wondered if it would produce a crackling display as we ate breakfast.

A visit to a Luwak coffee plantation followed, where a poor Asian palm civet consumes coffee berries, digests and ferments them internally, before defecating them into a new more aromatic form. Luwak coffee is known as “The World’s Most Expensive Coffee.”

Indeed, Jack Nicholson and Morgan Freeman’s ashes were placed on either side of a tin of this delicacy, atop a Himalayan Mountain in one of my favourite movies – “The Bucket List.”

Leaving the coffee plantation behind, we stopped once again, before beginning the highlight of our trip – the downward descent…

Our tour guide equipped us with bicycles of the right size, helmets for our safety, and bottles of water to prevent dehydration. Meanwhile, a lovely Australian couple gave me great tips on the intricacies of gear changing, before our little group set off on smooth, tarred roads that were thankfully free of traffic.

Throughout the bike ride, we encountered only an occasional scooter, but LOTS of smiling children cheered us all along our route. Thankfully, I had a minder – a second tour guide – who kept a good watch over me, and added to my education on the laws of gear changing!

Feeling more relaxed, I actually began to enjoy myself. However, I remained at the rear of the group for the first half of our trip.

Stopping at a Village

“We will stop here,” my minder announced, as we joined the others outside a village house. The owners welcomed us inside a series of small buildings, somewhat less affluent than my accommodation back in Nyuh Kuning. 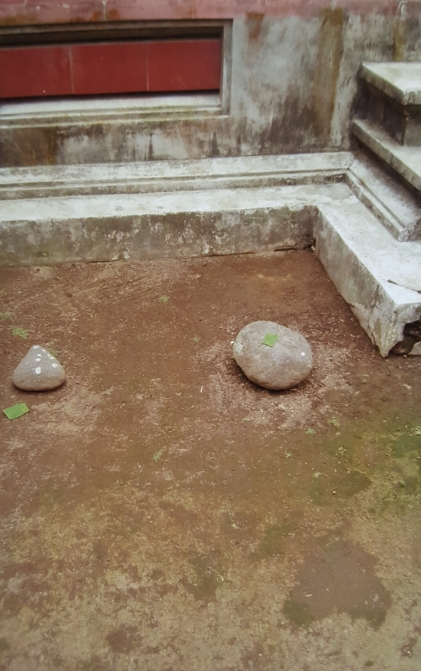 “These stones guard the family member’s placentas and will protect them throughout their lives,” he announced.

The rear of the compound held a garden, planted with neat rows of vegetables and a few flowers. The shade provided a welcome retreat from the sun for a family of chickens and two suckling pigs, which looked over a stone pig pen with imploring eyes. Sadly, they lead a very short life as suckling pig is considered an essential ingredient in traditional Balinese ceremonies.

Rural villagers are largely self sufficient, supplementing home grown vegetables, chicken and pork with locally grown rice. The rice paddies were our next stop.

Here we learned of the length of the growing season – three in a year- the irrigation system known as subak, and the organic method of fertilisation, using ducklings to manure the fallow paddies, whilst fattening them up for the gastronomic delights of Balinese smoked or crispy duck. Incidentally, everyone who works in the rice paddies shares in the season’s crops, although the landowner gets the largest portion.

Duckling in the Paddy Fields

As we stood amidst the paddies, having stepped over subak streams and slippery clods of earth, to delight in the endless green landscape, I had a burning question and asked, “Are there many snakes in the rice paddies?”

The reply was brief. “The farmer kills them every morning.”

Later, we witnessed a poor, muddy worker ploughing a flooded paddy field with a large version of a garden rotavator. We learned that he earned around 7 euro for ploughing a field of ten square metres – considered a small fortune by Balinese standards.

I wondered how many snakes he encountered each day?

The next stop was a village temple, filled with beautiful Balinese ladies, all chatting and laughing, as they created floral offerings for the temple. I delighted in photographing them in their rainbow of traditional lace tops and sarongs.

Ladies in the Temple

My energy levels were flagging, and I was now wilting from the heat. I silently wondered, “Are we there yet?”

Thankfully, “The End” was in sight.

I breathed a sigh of relief as VERY welcome iced face flannels were distributed, and a discussion followed…

Guess which option I chose?

Six of my travelling companions voted for the lunch NOW option, while two younger energetic cyclists chose the extended route. Ten minutes later, our group descended on a lovely restaurant, complete with its own organic vegetable garden, and delighted in a feast fit for royalty.

The uphill team joined us later, obviously the worse for wear!