Tory Island Walks – The Legend of Balor of the Evil Eye

“Walking is a man’s best medicine.”

Leabhar Gabhala Eireann ( The Book of the Taking of Ireland) suggests that Tory was first occupied by settlers from Turkey called Nemedians. A group of pirates from Carthage called The Fomorians banished the Nemedians.

Conan who was a Fomorian king, built a tower from whence Tory is believed to have gotten its name Tor Ri – tower of the king.

Conan was ousted by the Nemedians, but the island was later regained by the Fomorians, led by Balor of the Evil Eye Balor na Suile Nimhe.

The Fomorians waged battles along the mainland, defeating their opponents at the Battle of Moy Tura Magh Tuireadh in Co. Sligo.

Irish history was largely passed down by word of mouth and these stories are now viewed as myths rather than facts, but perhaps they are based on real events.

Buoyed by a love of the mystical, I just had to visit the east of Tory Island including the highest point on the north east known as Balor’s Fort Dun Bhaloir.

The view towards the mainland

The weather Gods were incredibly generous, as I walked along the sheltered south side of Tory, before travelling through East Town An Baile Thoir. 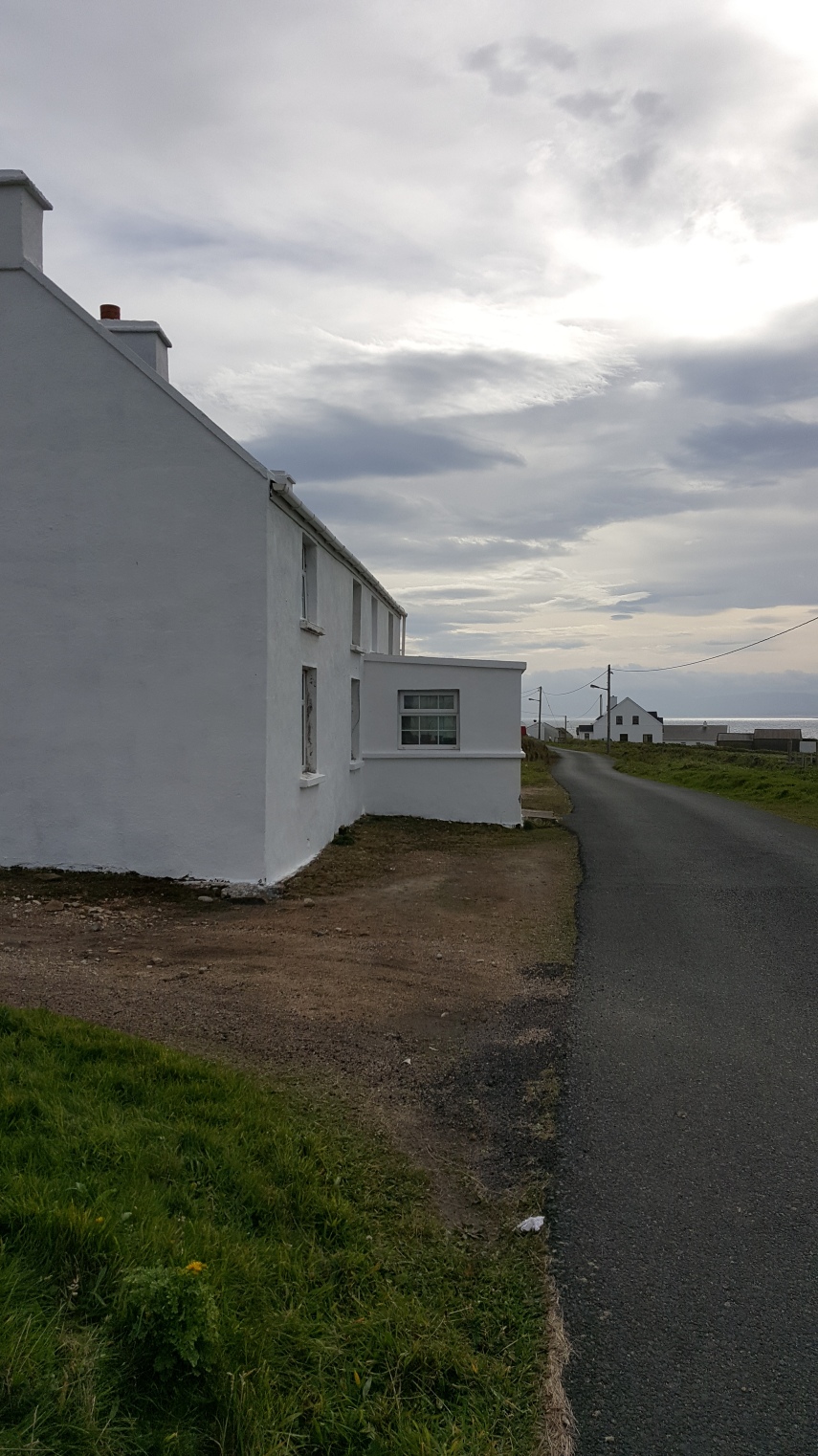 I travelled onward with not another walker in sight! 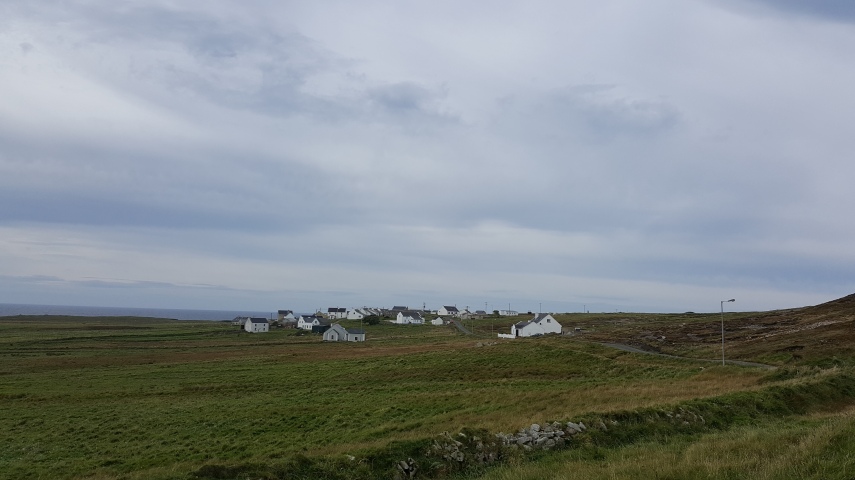 Looking back on deserted roads towards East Town An Baile Thoir 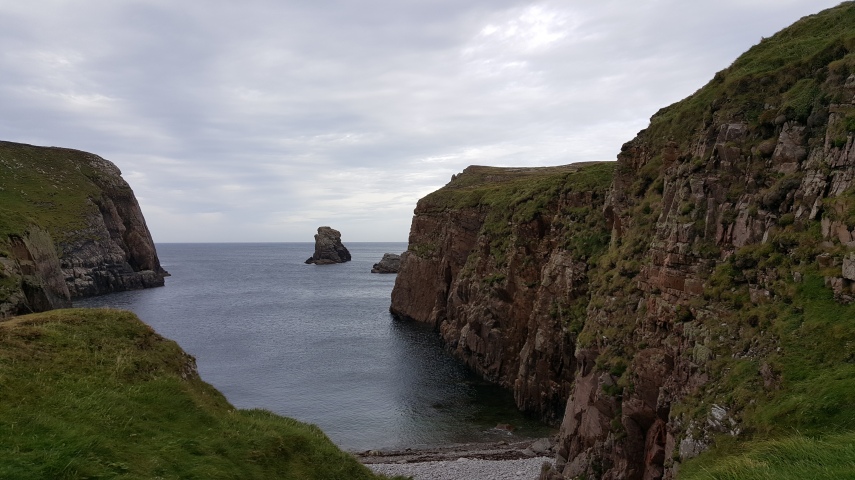 The north east corner of Tory is quite stunning, which compelled me to take rather a lot of photographs! 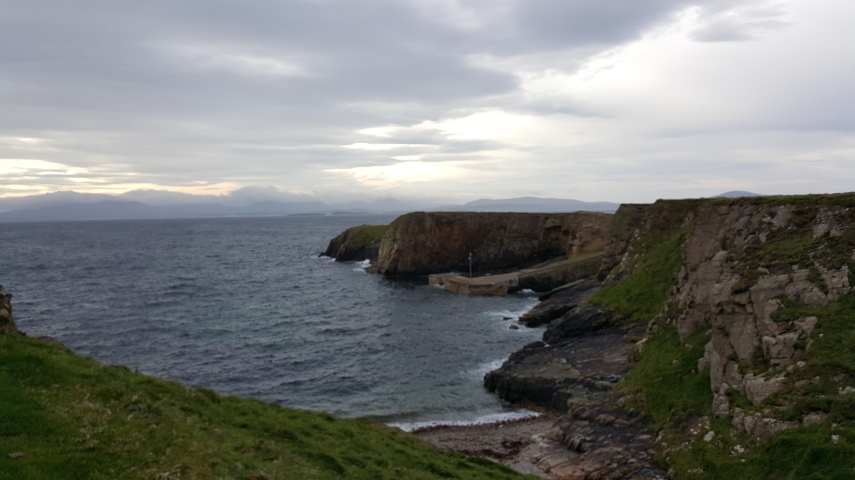 The harbour at Port an Duin

Once past the harbour at Port an Duin, I crossed an isthmus onto Dun Bhaloir. The path grew somewhat narrower and steeper; Dun Bhaloir is surrounded by cliffs on three sides – the perfect position for a fort.

Looking back towards East Town An Baile Thoir from Dun Bhaloir

My only walking companions

Balor’s Prison Priosun Bhaloir is a rocky cleft, where Balor is reputed to have thrown his prisoners…

Looking westwards across the island from Dun Bhaloir

I continued my climb, enjoying views along the length of the island. You can just glimpse the lighthouse in the far distance.

On the east of Dun Bhaloir is a long rocky peninsula called The Big Key An Eochair Mor, which ends in The Big Rock Tor Mor.

A Druid prophecy foretold that Balor would be killed by his grandson. Eithne, Balor’s only child was thus imprisoned in a stone tower on Tor Mor. Twelve women kept Eithne company, and were warned that they should never speak of a man and Eithne should never see a man.

Balor’s demise unfolds with the stealing of a cow belonging to a swordsman called Gaibhidin from the mainland tribe, the Tuatha De Danaan.

Cian, a Tuatha De Danaan chieftain was sent to find and return the cow to the mainland.

Miraculously, with the aid of a Druid woman called Birog, Cian entered the tower and fell in love with Eithne, who delivered triplets some time after Cian’s visit.

Balor fell into a rage, beheaded Cian and threw the poor triplets into the sea. However, one of the triplets was rescued by Birog and christened Lugh.

Lugh eventually made his home in a fort at Dunlewey Dun Luiche at the bottom of Errigal Mountain.

Some years later, Balor paid a visit to Gaibhidin’s forge, and bragged of killing Cian and the triplets. Unaware that Lugh had survived, Balor succumbed to the prophecy, when his grandson plunged a fiery rod from the furnace into his head and out through his eye!

Another version of the story has Lugh leading the Tuatha De Danaan at the second battle of Moy Tura, and killing Balor with a slingshot that sends Balor’s eye shooting out of the back of his head!

In any event, The Poisoned Glen Gleann Nimhe near Dunlewey is named after the poison that flowed from Balor’s Evil Eye.

Unfortunately, I succumbed to vertigo when positioning myself for the best photo opportunity of An Eochair Mor.  I could only catch a little of its length; Tor Mor is therefore missing from my photograph.

The rocky points on The Big Key An Eochair Mor are known as Balor’s Soldiers Saighdiuiri Bhaloir.

A welcome bench with Dun Bhaloir in the background

Returning over the isthmus, I felt in need of a rest, and returned to Planet Earth on a bench facing East Town An Baile Thoir.

I reflected on my short visit to Tory Island. I had walked a good distance over the two days, enjoyed stunning scenery and great weather, stayed in incredible bed and breakfast accommodation, met so many kind people including a king…

I know I shall return.

If you wish to read more about Lugh, Balor and the legends of Tory Island, you might enjoy “Lugh na Bua – Lugh the Deliverer” by Sean O’Gaoithin and Cathal O’Searcaigh with beautiful illustrations by Sean Fitzgerald.

Tagged as: Balor of the Evil Eye, Irish Myths and Legends, The Fomorians, The Tuatha De Danann, Tory Island, Walks