Visitors to Tory Island are greeted by a large Tau Cross, which stands near the harbour. It was carved from a single slab of mica, and measures 1.9m high by 1.1m wide. There is only one other Tau Cross in Ireland, located at Kilnaboy in Co. Clare.

The Tau Cross gets its name from the Greek letter that it resembles, and is often associated with Saint Francis of Assisi and the Franciscan order.

However, Tory Island is associated with a different saint – Colm Cille also known as Saint Columba

Colm Cille founded a monastery on Tory in the 6th century, and is believed to have come ashore near the harbour at Port an Churraigh. A footprint on a rock marks the spot.

Keen to find this sacred indentation, I asked a man with a fishing rod for help. He kindly told me to wait around 30 minutes for the tide to go out…

I sat down near the harbour and waited, delighting in the sound of the waves.

The kind fisherman returned and pointed out Colm Cille’s footprint. 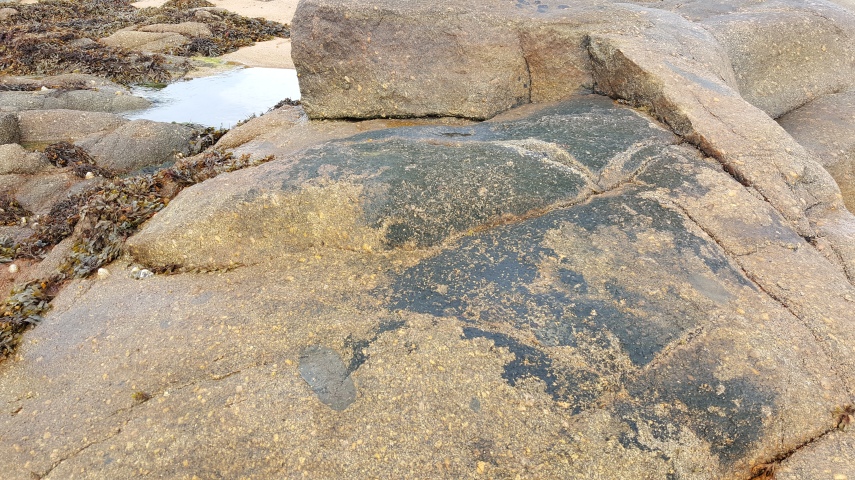 The monastery on Tory was founded between 548 and 561, close to the harbour. Sadly, it was raided and destroyed in 612.

A bell tower survives from that period which once housed Colm Cille’s Bell Clog Cholm Cille.  The tower was damaged by lightning in the late 18th century, and the bell was relocated to John the Baptist’s oratory Ulai Eoin Baiste. It disappeared in the early 19th century, never to be found. 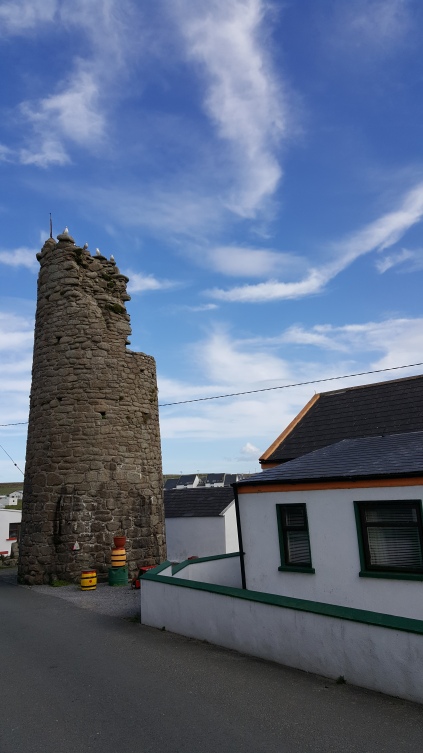 The oratory may have been the site of Colm Cille’s church. The remains (seen below) include fragments of a cross featuring a hooded figure with outstretched arms, and a slab thought to originate from Colm Cille’s Church.

The Church of the Seven Moirsheisear

The remains of the Church of the Seven Moirsheisear can be seen on the edge of West Town An Baile Thiar.

Moirsheisear commemorates six men and one woman who drowned and were washed onto the island’s north west coast.

Colm Cille ordered their burial and the building of an oratory over their graves. However, the woman’s remains were found lying over the graves the following morning. She was reburied, only to be discovered once again lying atop the graves!

Thought to be a saint, she was laid to rest on a site west of the church, called the Nun’s Grave.

Clay from her grave is traditionally used to protect against vermin; there are no rats on the island. Tory Clay Uir Thorai is lifted by the eldest of the Duggan family, and is still used today for its special healing powers.

The Church of the Seven Moirsheisear

St Brigid’s Altar Ulai Bhride can be found hiding up a small alleyway, not far from Ulai Eoin Baiste.

Colm Cille’s chalice Cailis Cholm Cille is believed to have been kept at Ulai Bhride. The chalice is now housed in Ireland’s National Museum.

Next Friday, I will share my final post on Tory Island – The Legend of Balor of the Evil Eye Balor na Suile Nimhe.

Tory Island Walks -The Legend of Balor of the Evil Eye